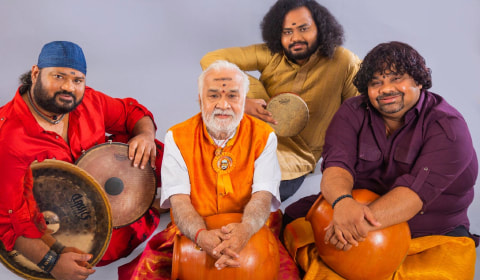 South Indian Percussion
Since ancient times Indian music been associated with religious devotion and been connected to temple rituals and social functions. It has its origins in the Vedas, a compilation of sacred texts, prayers, and chants dedicated to various Hindu divinities. Vedic literature refers to the use of various percussion instruments in the development of taal (tala), the rhythmic element in Indian classical music.


An essential element in the study of rhythm and meter in both Carnatic (South Indian) and Hindustani (North Indian) music is the use of vocal syllables as a percussion instrument. In Carnatic music this is called konnakol. This Tamil word derives from the Telagu word “koni” (to recite) and “kol”(to rule or reign).  Thus the word konnakol implies that percussive vocal recitation is the 'king' of all percussion instruments. As a language, konnakol has developed in vocal imitation of the percussion sounds and patterns played by the instruments of the traditional Carnatic rhythm section (the mrdangam (barrel drum), ghatam (clay pot)and kanjira (small frame drum)); thus, each drum stroke corresponds to a vocal sound. Over time and with the influence of many innovative artists, konnakol has developed a language well beyond the scope of the sounds of these instruments.


While percussion plays a major role in both the Carnatic and Hindustani musical traditions, it is only in the Carnatic tradition that multiple percussion instruments are employed. Contrary to tradition, where the mrdangam plays the leading percussion role, Vikku Vinayakram’s ensemble is led by the ghatam, a bulbous earthenware pot that is open at the top and has a narrow neck. The instrument resembles an ordinary clay pot and is played with both hands using fingers, thumbs, palms, and heels of the hands to strike the surface. An airy, bass sound is created by hitting the mouth of the pot with an open hand. The bass stroke can be deepened by pressing the mouth of the pot against the bare belly. The kanjira isan ancient tambourine-like hand that is mentioned in the great Indian epic, the Ramayana. The wooden frame of the drum comes from the jackfruit tree and the drumhead is from the skin of a monitor lizard and is pulled tight, so the drum is pitched quite high. To offset this and provide a bass, the tension is reduced by applying water to the inside of the skin repeatedly during a performance. The drum is played with the palm and fingers of the right hand and the pitch is bent by applying pressure to the skin near the outer rim with the fingers of the left hand. The variety and intricacy of the sounds produced by this small and seemingly simple and limited instrument are astounding.
Selvaganesh, Vikku’s son, employs various drums in his hybrid drum kit that produce sounds akin to those of the traditional Carnatic percussion ensemble, including those of the kanjira and tavil (large two-headed drum played with sticks on one surface and thimbles on the other). In addition, he has added cymbals to add further color. The fifth instrument used in this ensemble is the morsing, a jaw harp.


The Artists
Three generations of virtuosic musicians come together to provide rhythmic fireworks in this celebration of Carnatic (South Indian) percussion.  The legendary Vikku Vinayakram leads his family of virtuoso musicians, often referred to as the “first family” of percussionists in Carnatic music. He is joined by his two sons, V. Selvaganesh and Umashankar, his grandson Swaminathan Selvaganesh, and A. Ganesan, a close friend of the family.


Vikku Vinayakram, one of the most celebrated percussionists of South India, has popularized the ghatam over his long career. Son of the noted percussionist T. R. Harihara Sharma, he was a child prodigy who began performing at the age of 13. He went on to accompany many famous Carnatic artists, including M.S. Subbulakshmi, G.N. Balasubramaniam, Mani Iyer, and Maharajapuram Santhanam, and perform his virtuosic rhythms with the Shakti fusion ensemble alongside John McLaughlin, L. Shankar and Zakir Hussain. For his contributions to Indian music, he has received India’s major honors, including the Hafiz Ali Khan Award for "unmatched contribution in the field of music" (2000), the Padma Shri Award (2002), the Sangeet Natak Akademi Fellowship - the highest award in the performing arts in India (2012), and the Padma Bhushan (2014). He also was the first South Indian musician to be awarded a Grammy for Best World Music Album for his participation in Mickey Hart's Planet Drum, in which he played ghatam and morsing. He is Principal of Sri Jaya Ganesh Tala Vadya Vidyalaya in Chennai, India – the academy established by his late father and teacher in 1958 that continues to produce new stars of Carnatic percussion.


V. Selvaganesh, one of India’s leading kanjira players, has been mesmerizing audiences with his rhythmic genius since making his debut at the age of 10. He had his initial training at his grandfather's school in Chennai, and then studied with his uncle, T H Subashchandran. In addition to performing Carnatic music, he has appeared in many fusion, jazz, blues, flamenco, symphony orchestra, Celtic, Latin and jugalbandi (duet) concerts throughout the world. He has played in music festivals with such renowned Indian artists as L. Shankar, Dr. L. Subramaniam, Pandit Jasraj, Shivkumar Sharma, and Hariprasad Chaurasia, and toured the US with Zakir Hussain’s Masters of Percussion and Remember Shakti with John McLaughlin and Zakir Hussain. He has also worked with many leading music directors in India, composed and produced albums, and played with the Swedish bass virtuoso Jonas Hellborg and American guitar player Shawn Lane. In the field of Indian film music, he can be heard performing in Life of Pi and Mira Nair’s Vanity Fair and Monsoon Wedding.


Umashankar, the only one amongst his siblings to follow in his illustrious father’s footsteps by taking ghatam as his main instrument, gave performances at the age of five at his grandfather’s school. When he was only 12 years old, he accompanied the legendary T. V. Gopalakrishnan in Kanchipuram, which led to his role as a popular accompanist in classical Carnatic music. He has accompanied such artists as T. M. Krishna, Vijay Siva, Sanjay Subramaniam, Unni Krishnan, Ganesh Kumaresh, Nithyashree Mahadevan, the Priya Sisters, and Sudha Raghunathan.


Swaminathan Selvaganesh, who has mastered the intricacies of kanjira, is lauded as one of the top kanjira players of his generation. The grandson of Vikku Vinayakram and son of V. Selvaganesh, he started learning kanjira when he was four years old under the guidance of his grandfather and father and gave his first performance at the age of 13 accompanying his grandfather. Like his father, he is known for popularizing the kanjira through cross-cultural collaborations. He has toured widely with his grandfather and father, and composed music for films. He has shared the stage with such major artists as Hariprasad Chaurasia, Pandit Jasraj, Balamurali Krishna and Zakir Hussain.


A. Ganesan has established his own style of playing the morsing and won accolades and honors for his dexterity and dynamism. He started learning morsing from Vikku Vinayakram’s father Harihara Sharma and later on from Vikku. He has toured with Vikku throughout the world and performed in ensembles featuring Zakir Hussain.