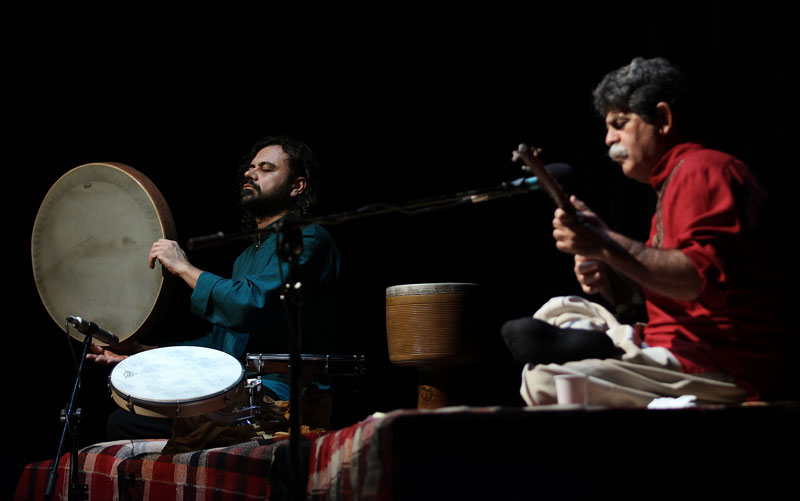 Amongst the Kurdish people music since antiquity has been associated with sacred ritual, in particular through various Sufi orders.  Ahl-e Haqq (followers of truth), known in Iran as Yarsan, is a Sufi order of around one million members, found primarily in Iran and Iraq; they are closely related to the Alevi and Bektashi of Turkey, and the Alawi and Nusayris of Syria. Popularly known as Alielahi (worshippers of Ali), the Ahl-e Haqq call their faith Din-e yari (religion of God).


Regarded as heretics by their Shiʿite and Sunni neighbors, the Ahl-e Haqq adopted a strict code of secrecy. They came to define their faith as a sirr (mystery), to be guarded from the outside world at any cost. The mystery was transmitted orally in the form of poetry known as kalam, which forms the sect's sacred narrative. The Ahl-e Haqq neither observe Muslim rites, such as daily prayers and fasting during the month of Ramadan, nor share Islamic theology and sacred space. Instead, they have their own sacred universe and their own rituals, centered on the jam (assembly), when they chant, play the sacred tanbur, make offerings (niyaz), and share a sacrificial meal (qorbani).


In this concert, entitled Mystic River, Ali Akbar Moradi and Pejman Hadadi engage in an intimate dialogue that highlights the ecstatic, trancelike nature of Kurdish sacred music. Together they weave an intricate web of improvised melody and rhythm. In addition to his virtuosic playing of the tanbur, Moradi invokes the divine through sacred chants and Kurdish translations of mystical Persian poetry while Pejman adds color through a variety of complex rhythms on tombak, daf and assorted percussion.


The Instruments
The tanbur is the primary instrument of Kurdistan and is one of the world’s earliest string instruments. The pear-shaped body is made of mulberry wood and the long neck has 14 or 15 movable gut frets. While the ancient tanbur had 2 silk of gut strings, the modern instrument has three metal strings. The two lower strings are made of steel and tuned in unison and are fingered together to provide the melody. The top string, tuned a fourth or fifth below, is made of copper or brass and functions as a sympathetic string and is often played with the thumb. Difficult to master, the tanbur is played by sweeping across the soundboard with all the fingers, producing a tremolo effect known as shorr (literally “the pouring of water”) and creating the illusion of several instruments being played together. The technique will be familiar to flamenco guitarists who use a similar technique known as rasgueo. As Moradi has said, “I discovered the tanbur in 1964, due to chance and by the grace of God, when I was only seven years old. I felt that this instrument had a soul and that it spoke to me: its song cradled me and purified me with every passing day. My grandfather and my father gave me great encouragement in this vocation because, for the Yarsan, the initiation in the tanbur is a pious task. From the beginning they sent me to the greatest masters. Now, I must devote my life to it. Without it, my life would be just a series of dull and futile days.”


The daf is a large frame drum used in sacred ceremonial music throughout the Arab, Turkish and Persian world. The Persian model has jingles made of small wire rings that create a shimmering “otherworldly” effect. It is particularly important in Sufi ceremonies.


The tombak is a goblet-shaped drum carved from solid mulberry wood and covered at the wide end with lambskin or goatskin. It is the primary percussion instrument of classical Persian music. It is held horizontally across the player’s lap.


Ali Akbar Moradi is the greatest living master of the tanbur. Born in Guran in 1957 near the city of Kermanshah, he began playing the tanbour at the age of seven and studied with such grand masters as Sayyed Veli Husseyni, Sayyed Mirza Khafashyan, Sayyed Mahmoud Alevi, and Allahmouradi Hamedi. He gave his first recital at the age of 14 in Kermanshah, and one year later founded the first tanour ensemble within the cultural department of the city. His fame increased in 1981 through his collaborations and tours with singer Shahram Nazeri in Europe, the US and Canada. By the age of 30, he had learned the entire 72 maqams (modes) of the Kurdish tanbour repertoire, making him perhaps the only living artist with this knowledge.  He has made numerous recordings, including ones with Pejman Hadadi and Kayhan Kalhor, and appeared at such major festivals and venues as the World Festival of Sacred Music in Los Angeles, the Hellenic Festival in Athens, Greece, and the Royal Festival Hall in London.  He currently teaches in Teheran and Kermanshah.


Pejman Hadadi, one of the most prolific percussionists from Iran, is known for his collaborations with major artists from Iran and other cultures, including Hossein Alizadeh, Shahram Nazeri, Parissa, Ali Akbar Moradi, and Shujaat Khan. He began studying tombak, with master musicians Assadollah Hejazi and Bahman Rajabi and later taught himself to play the daf. He immigrated to the US in 1989 and began his professional career in 1991, performing and recording with ensembles of Persian classical music, as well as Indian, Turkish and American musicians. In 1995, he joined the celebrated Dastan Ensemble, and in 2000 co-founded the first Iranian percussion ensemble, Zarbang. He has created a signature style that has greatly influenced tombak players of his own and later generations. He is a two-time recipient of the Durfee Foundation Master Musician Award and founded the Neyreez World Music Institute in Southern California. Hadadi has toured extensively in North America, Canada, Europe, Iran and Japan, performing in prestigious international festivals and concert halls.