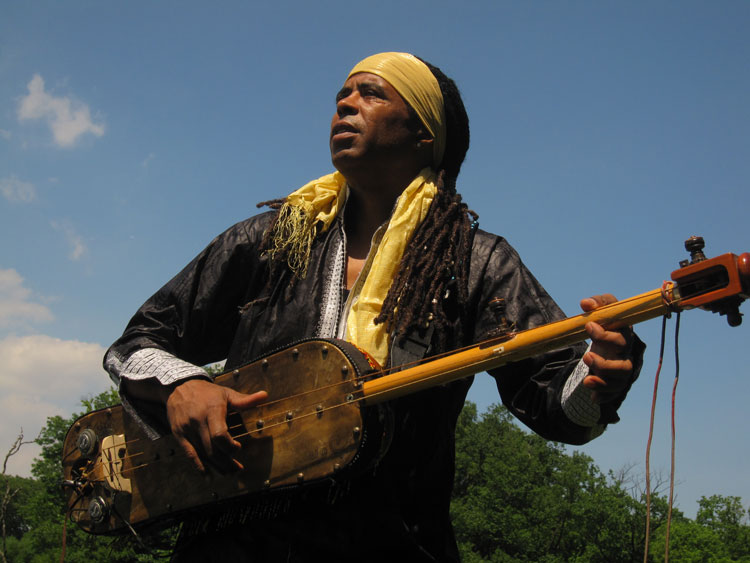 Of all the varieties of music in Morocco, the Gnawa have gained the most international recognition.  The clear, balanced structure of the pentatonic melodies and the propulsive drive of the syncopated rhythms seem somehow familiar, even on first listening. The impression of familiarity is no accident, since the music of the Gnawa, like many of the popular musics of the Americas, is built of elements derived from West Africa.

Before the 1960s, the Gnawa were most visible as entertainers, performing acrobatic dances to the accompaniment of large side drums (tbel, or ganga) and metal double-castanets (qaraqeb). Entertainment, however, was secondary to the Gnawa’s more important, and more esoteric, role as intermediaries in the spirit world. The Gnawa claim spiritual descent from Bilal al-Habashi, a freed Ethiopian slave who was the Prophet Mohammed’s first muezzin (caller to prayer), and they also recognize and respect all Muslim saints. But most aspects of Gnawa ritual clearly come from south of the Sahara, brought to Morocco over the course of centuries by merchants, mercenaries, students, and slaves. Their song texts contain many references to tribal and place names in the Sahel, and to the privations of exile and slavery.

Most Gnawa ceremonies (lila, lit., night) are held to placate spirits, both good and evil, that have inhabited a person or place.  Although the musicians are almost invariably men, the majority of devotees, and often the spiritual leader as well, are women.  The evening begins with entertainment songs (kuyu or Ulad Bambara) accompanied by hand clapping and the sintir, a three-stringed, skin-faced lute.  When most of the participants have arrived, the assembled crowd steps outside for a short performance (l-cada) on tbel and qaraqeb, to notify neighbors and spirits alike that the ceremony is about to begin.  The guests then carry candles as they process back indoors, where they are given a small portion of dates and milk, signaling that the private house is now a ritual space.  The musicians switch to sintir and qaraqeb for the nugsha, when bolts of colored cloth are passed over a brazier filled with incense.  Finally, the derdeba—the trance ritual proper—begins.

The derdeba celebrates seven families of saints and spirits (mluk). The saints and spirits each have their own tunes, and a given melody (with or without a sung text) is said both to attract the spirit and to indicate its presence. In addition, each is represented by a different color, requires a different combination of incense, and expresses a particular character in the dancers they possess.  In order to give all the spirits their due, a complete lila may last from early evening until well past dawn on the following day. Finally, when all the participants, visible and invisible, have been satisfied, the musicians return to lighter entertainment music to relax the spectators and bring them back to the everyday world.

For centuries, the Gnawa were socially and economically marginalized, but their status has changed dramatically in the past 50 years.  Starting with Randy Weston in the late 1960s, dozens of jazz and popular musicians have collaborated with the Gnawa and helped spread their reputation around the world.  Traditional Gnawa groups have performed for enthusiastic audiences from Paris and New York to Tokyo and Rio de Janeiro. At the same time, Gnawa music has formed the basis of several new styles of popular music in both North Africa and Europe.  Since 1998, a festival dedicated to the Gnawa and World Music has drawn hundreds of thousands of visitors each year to the seaside town of Essaouira.

--Philip Schuyler has been a student of Moroccan music since 1968. His most recent project is the Grammy-nominated Music of Morocco: The Paul Bowles Collection (Dust to Digital, 2016). He is also curator of a gallery of forgeries at https://www.pipposterous.com/

The Artist
Hassan Hakmoun, born in Marrakesh, is one of the most notable figures in contemporary Moroccan music. He is the premier exponent of Moroccan Gnawa trance music in America and a commanding figure in world music circles. He was schooled in the deeply traditional sounds of the Gnawa people in his native Marrakech and, since moving to the US in 1987, has absorbed elements from a variety of popular styles, from jazz and world music to neo-classical contemporary Western music and cerebral pop. This has resulted in a diverse, critically acclaimed body of work. His participation in such internationally renowned arts festivals as WOMAD and collaborations with respected artists, including David Sanborn, Peter Gabriel, Don Cherry and the Kronos Quartet, have inspired artists from North Africa and around the globe to follow in his footsteps. Hakmoun began learning Gnawa music after witnessing his first trance ceremony at the young age of four. By the age of 14, he was an established musician performing at Gnawa lila ceremonies with his own ensemble. He made his US debut in 1987 at Lincoln Center with Trio Gna & Nomadas. He quickly became a regular fixture in New York’s rock, jazz and fusion scenes, earning his following for spanning multiple genres. His albums include Fire Within (1989); Trance, which was selected by Rolling Stone as a “Hot Pick of ’94”; the INDIE award-winning The Gift (2003); and Spirit, the number one CD in world music in Japan in 2013.