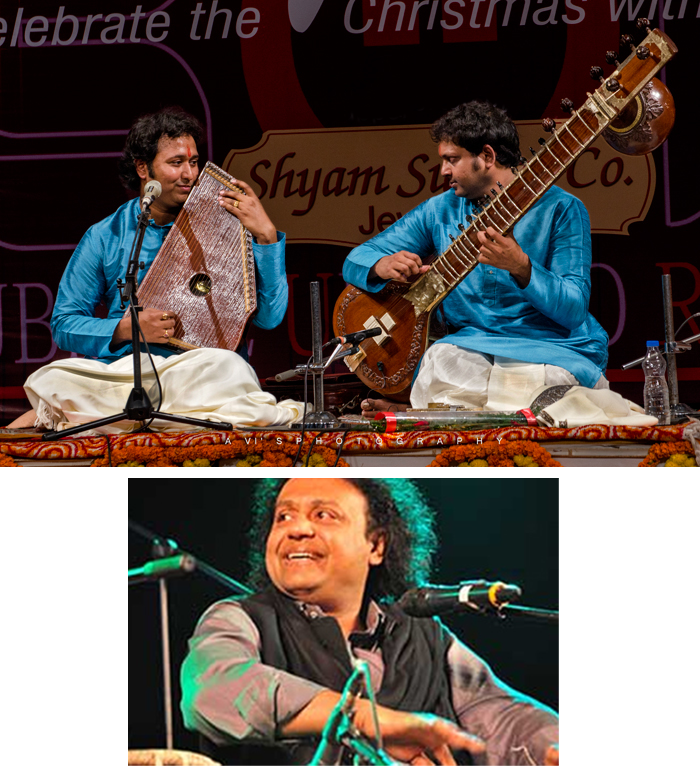 Virtuosos Debapriya Adhikary and Samanwaya Sarkar, two of India’s foremost young artists, perform a jugalbandi that is unusual in that it is a duet with vocal and sitar (lute) instead of the more common duets with two instrumentalists or two vocalists.
North Indian (Hindustani) Classical Music
North Indian classical music is one of the most highly developed art musics in the world. Partaking strongly of improvisational elements, the structural framework of the music is provided by a system of melodic patterns called ragas and of rhythmic patterns called talas. Within the framework, the performers must create the musical fabric at the moment of performance.

Following tradition, the musician doesn’t perform a set program, but rather plays different ragas as inspired at the moment. The choice of raga is not usually a matter of whimsy: in accordance with centuries old philosophical traditions, certain ragas are considered to be appropriate to specific times, seasons of the year, and even states of mind. Ragas are not to be confused with the Western notion of “scales,” for while each raga has a characteristic pitch structure, much more is implied. The order in which the notes of the raga are introduced, and the manner in which the raga itself is revealed and unfolded are all extremely important. So, also, are matters of ornamentation, pitch alteration, and melodic structure.

Talas are the rhythmic frameworks around which Indian music is composed and improvised. Each tala has a constant number of beats, organized into phrases. Sometimes the phrases are equally divided (ie. Teental, 4-4-4-4), and sometimes they are of unequal lengths (ie. Dhammar 5-2-3-4). Both soloist and accompanist are required to always be aware of the returning of the first beat of the tala. Although in the midst of a composition or improvisation it is permitted (and even encouraged), to emphasize beats and phrases contrary to the framework of the tala, all variations must eventually return to the first beat of the cycle.

The tradition is largely an oral one, passed on by each master to students. Performances are appreciated by the audiences in many of the same ways as jazz improvisations: that is, performers are expected to demonstrate extensive knowledge of the traditions of the individual raga. Nonetheless, in both traditions, the performer is admired when able to cast some new light on the familiar: it is the ability to honor the integrity of the raga while doing so in an intensely personal way that wins the greatest esteem.

The basic form for the interpretation of a raga is made up of four parts: alap, jor, jhala, and gat. The alap is a slow introduction where the performer contemplates the raga note by note, composing phrases, at first quite simply, with the two or three notes nearest the tonic, but gradually becoming more and more complex. Much use is made of microtonal inflections, ornamentation and glissando.

When the artist feels that he has completed his exposition of the raga through the alap, he introduces the jor (a rhythmic pulse), starting again by playing short phrases against his regular striking of the drone strings. The improvisations become more and more extended, ending with fast staccato passages called tans, full of rhythmic subtlety and requiring considerable virtuosity. After this comes the jhala where the artist performs a variety of rhythmic patterns utilizing the “chikari” strings (high pitched drone strings). Finally comes the gat where the tabla enters.  The gat is really in “Rondo” form with the main subject being a previously composed motif, which is set to a recurring rhythmic cycle called the tala. As with the Western rondo where the main theme returns after each variation, the Indian performer, having improvised for a few cycles, will return either to the beginning of the theme, or to the first beat of the new cycle. The performance ends with a musical dialogue which builds to a climax involving a display of technical virtuosity.

Some North Indian Vocal Genres
Khyal is the contemporary form of North Indian classical vocal music that became popular in the mid–18th century. A khyal includes one or two short songs (bandish); the raga unfolds with a considerable amount of improvisation based on the syllables of the song/poem.

Thumri is a light classical genre that originated in the 15th century and became highly developed in the mid–19th century. It is a lyrical and romantic style that gives the performer considerable freedom to introduce various ragas. The texts express desire, longing, and separation, usually through the love story of Krishna and Radha.

Dadra refers both to the six-beat tala and to a light classical song form that is a derivative of thumri. This style has been popularized in recent years through Bollywood songs.

Tappa is a semi-classical song form that uses fast, subtle and knotty phrases that depict the emotional outbursts of a lover. It derives from the folk songs of camel drivers of Punjab and Sindh. It was developed as a form of classical music by Shori Mian, an 18th century court musician and poet.


The Instruments
The sitar, a long-necked lute with a large gourd resonator, has gained much attention in the West in the last few decades. One of the most popular stringed instruments of northern and eastern India, it usually consists of 20 strings - 7 main playing strings, and 13 sympathetic strings. The strings can be pulled or stretched over the metal frets to obtain gliding and melismatic effects much in keeping with the ideal of Indian classical music to emulate the human voice.

Tabla, the most important percussion instrument in North Indian classical music. consists of a pair of small hand drums. The right-hand drum, tabla, is tuned to the tonic, and is often re-tuned with a hammer during a performance. The left-hand drum, banya, acts as the bass drum and is capable of many tones that can be varied by degrees of pressure from the base of the left palm.

The Artists
Debapriya Adhikary and Samanwaya Sarkar trained with the legendary Padmavibhushan Girija Devi and have traveled worldwide, both as soloists and as a duo, with their brilliant renditions of Hindustani (North Indian) music.  They are “A” grade artists of All India Radio and Doordarshan, and composed and performed music for the 2012 Australian film The Sleeping Warrior based on Indian and Aboriginal spirituality. They directed the award-winning documentary of their mentor’s contributions to music, Girija: A Lifetime in Music, which received the award for Best Documentary Feature at the Los Angeles Independent Music Festival in 2016.

Debapriya is one of India’s finest vocalists of the younger generation. Initially he got his music nurtured in childhood at the hands of his mother Smt. Anita Adhikary. He then went on to study with Samaresh Chawdhury of the Senia gharana (tradition) for 13 years, Kumar Prasad Mukherjee of the Agra Atrauli gharana, Vijay Kichlu, and the legendary Padmavibhushan Girija Devi of the Benaras gharana. He has a Masters in Music from the University of Calcutta.


Samanwaya is an outstanding sitarist of the younger generation. He started his primary lessons from his early childhood at the hands of Sasanka Bandopdhyaya, and went on to train with Manilal Nag of the Bishnupur gharana for 12 years, Shyamal Chatterjee of the Senia Maihar gharana, Kumar Prasad Mukherjee of the Agra Atrauli gharana, and Padmavibhushan Girija Devi. His studies greatly contributed to his distinctive style of blending Tantrakaari ang (style of instrumental music) with gayaki ang (style of vocal music) of dhrupad and khayal.

Tanmoy Bose, one of India’s most accomplished tabla players, is known for his long association with icons Ravi Shankar and Amjad Ali Khan.  He has also accompanied L. Subramaniam and Kavita Krishnamurthy in their world music projects. He received his early tutelage from Kanai Dutta and went on the study with Shankar Ghosh, the noted torchbearer of the Farukkabad gharana. His Taaltantra, which has emerged as a foremost world music band, has enthralled audiences in the Middle East, North America, Europe and India with its experiments in jazz, Indian classical music, folk music and indigenous drumming. Bose has been a participating musician on two Grammy winning recordings, Concert for George and Full Circle, and composed music for award-winning films.