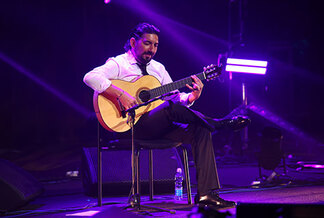 Latin Grammy-winner Antonio Rey is one of the top flamenco guitarists of his generation, dazzling audiences around the world with his soulful and powerful performances and compositions. Born in Madrid into a family of artists, he received various prestigious awards, including the “Premio Nacional de Guitarra.” Since beginning his musical career at the age of ten, he has worked with such renowned artists as dancers Antonio Canales, Joaquín Cortés and Farruquito, guitarists Paco de Lucia and Vicente Amigo, and singers Miguel Poveda, Diego el Cigala, and Estrella Morente. MORE INFO... 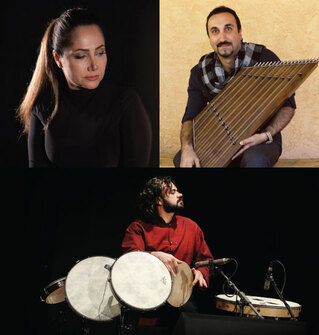 This entrancing concert brings together three brilliant musicians in the world of Persian music: the exquisite vocalist Mojgan Shajarian, daughter and disciple of the legendary Mohammed Reza Shajarian; Pejman Hadadi, one of the most innovative Iranian percussionists today; and santur (zither) virtuoso Sourena Sefati.  Mojgan Shajarian performed with her father at major festivals and concert halls in Europe, North America and Australia, and studied setar (lute) with Mohammed Reza Lotfi and Hossein Alizadeh..  MORE INFO...

In recent weeks the world lost two celebrated people in traditional Irish music – Dennis Cahill and Mick Moloney, who both appeared at concerts we presented 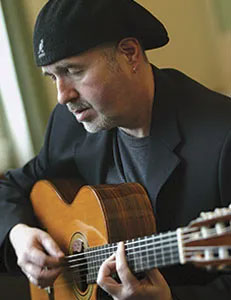 Dennis Cahill, born and raised in Chicago to parents from County Kerry, Ireland, was a renowned guitarist in the world of Irish traditional music, He was best known for his genre-defining duo with Irish fiddler Martin Hayes, with whom he toured the world and recorded three albums on Green Linnet Records. Their partnership ranked among the most memorable ones in Celtic music. A groundbreaking musician, Dennis took traditional Irish music in new directions, incorporating elements of classical music, blues and jazz.

“His beautiful musical ideas will echo far into the future and his friendship will live on in my heart,“ said Martin Hayes. “He impacted my life and expanded my musical horizon. I was lucky to have known him, to have had him as a friend and to have had the privilege of making music with him for so many years." President of Ireland Michael D Higgins paid tribute to Cahill saying, “Dennis brought a unique and innovative style to his guitar playing, while being deeply respectful of the essence of traditional Irish music. He and Martin Hayes explored new musical territory and helped create a phenomenal interest in traditional music among a new generation of people both within Ireland and across the world."

Dennis and Martin collaborated with a wide range of artists including jazz musicians Bill Frisell and Cassandra Wilson, country music star Ricky Skaggs, Spanish composer and early music maestro Jordi Savall, the Irish Chamber Orchestra, and Sting. With Martin, Dennis was a founding member of The Gloaming, which appeared at Carnegie Hall in 2019.

We remember fondly the many concerts they performed together under the auspices of World Music Institute from 1999 to 2011. Dennis was far more than an accompanist. Beneath his quiet and unassuming manner there lay a powerhouse of rhythmic intensity. His artful guitar lines provided a perfect complement to Martin’s brilliant fiddling. 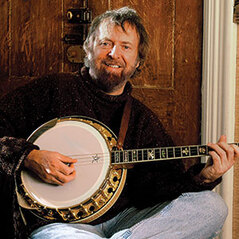 Mick Moloney, beloved musician (banjo, mandolin, guitar), teacher, pioneering scholar, folklorist, and concert producer, was one of the giants in Irish music. He was born in Limerick, Ireland, and moved to the US in 1973. A driving force in Irish music in the US, he was influential in bringing Irish music out of pubs and parlors to the concert stage, and championed the legacy of Irish American music. He encouraged female instrumentalists in a male-dominated field, and passionately explored the connections between Irish music with African, Jewish and American roots music. He co-founded the Green Fields of America, which became the leading traditional Irish ensemble in the US, and was involved as a musician or producer on over 100 albums. He taught at NYU for over 20 years, where he was the Global Distinguished Professor of Music and Irish Studies. A great humanitarian, he was a music teacher and music therapist for children with HIV at Mercy Center in Thailand. His many awards included the 1999 National Heritage Fellowship, this nation’s highest honor in the traditional arts, and the Presidential Distinguished Service Award for the Irish Abroad, which he received in 2013 from the President of Ireland.

We presented Mick many times under the auspices of World Music Institute in concerts that brought smiles to our faces. A superb raconteur, he always had wonderful stories to tell us backstage. He had a commanding presence, both onstage and off, and we often felt that he would have played all night if the venues would have allowed him to do so.

“As he would often say of others, Mick was “a mighty man,” the likes of which we would be incredibly lucky to see again…Mick was a hero to many and truly changed Irish music in America.” Dan Neely, Irish Echo