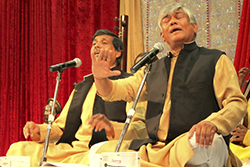 
The Gundecha Brothers are leading exponents of dhrupad, North India’s oldest classical musical form that is not often performed today. Disciples of the legendary Ustad Zia Fariduddin Dagar and Ustad Zia Mohiuddin Dagar, the brothers are renowned for their performances of this deeply spiritual and meditative vocal tradition rooted in Vedic chant. They received the title of Padmashri, India’s highest honor in the arts, in 2012, and have performed at music festivals and major concert halls throughout the world. Vocalists Umakant and Ramakant Gundecha are joined by Akhilesh Gundacha on pakhawaj (barrel drum).
​
Brian Q. Silver is an expert on the art of Dhrupad. He has taught Urdu language and literature, Indian music, South Asian culture, and world and contemporary American music at colleges and universities throughout the US and abroad and has published essays on South Asian, Iranian, and Middle Eastern music.
​
“They are two, yet one, so attuned, so aware of the other. Hand and arm gestures, like graceful mudras, seem to summon the sounds from impossibly deep, athletically trained inner chambers. The opening complete, they take flight, soaring into a spiritual space that has them singing, now together, now alone, back and forth, carrying us on wings of astounding synchronicity and soul stirring devotion. “ ---The Hindu